ONE AZANIA ! ONE PEOPLE! ONE NATION ! 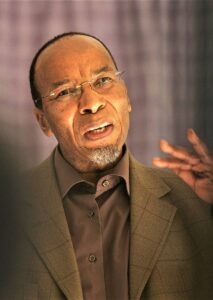 Dr Mosibudi Mangena is a respected academic, author and anti-apartheid activist who has contributed to the upliftment of the nation by serving the country in various fields. Mangena was born on 7 August 1947 in Tzaneen, Limpopo. He matriculated from Hebron Training College in 1969, and obtained a BSc degree, as well as an MSc degree in Applied Mathematics from the University of South Africa (Unisa).

Mangena was elected Chair of the South African Student Organisation (SASO) in Pretoria. In that same year, he was elected National Organiser of the Black People’s Convention. He was made Head of Quality Control Laboratory in a brick-making factory in Olifantsfontein. He also participated in the SASO literacy campaign in the Winterveldt Area.

In 1973, he was arrested for his political activities and imprisoned on Robben Island. On his release in 1978 he was banned and house arrested in Mahwereleng for five years. Mangena went into exile in 1980 and became the Chairperson of the Botswana region of the Black Consciousness Movement of Azania (BCMA) in 1981. He is the founding Commander in Chief of the Azanian Liberation Army. He later moved to Zimbabwe where he became Chairperson of the Central Committee of the BCMA from 1982 to 1994.

Mangena also wrote books, including My Grand Mother is Permanent (2004); A Twin World (1996); Quest for True Humanity (1996); and On Your Own (1989). He became the first Patron of the Sowetan-Telkom Mathematics and Science Teacher of the Year Awards and the founder Chairperson of the South African National Literacy Initiative (Sanli), as well as the Masifundesonke Reading Campaign in 2001.

He received an Honorary Doctorate in Applied Sciences (Technoligiae Doctoris) from the Vaal University of Technology, on 18 March 2008 in recognition of his service and invaluable contribution to the social uplifment of both our region and country.