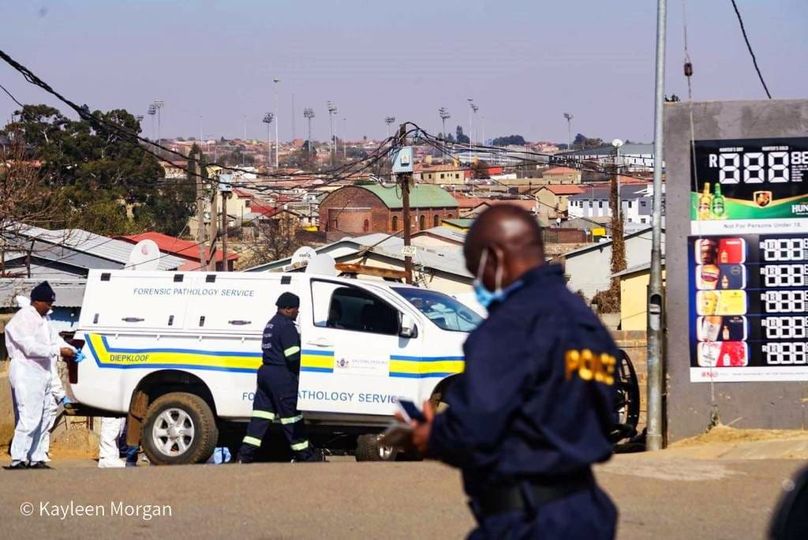 SELF-HATRED IS BEHIND THE TAVERN KILLINGS

On the heels of the Enyobeni tragedy where 21 teenagers died, more tavern deaths have taken place in various black communities this past weekend. A cynical view is that government may have invited this misfortune by staging a fake mass funeral of the 21 teenagers with 19 empty coffins.

Two armed men are said to have rained 130 AK47 rounds on people who were drinking at the Mdlalose Tavern in Nomzamo settlement in Soweto. 16 people have since died. In the same weekend, 4 people were shot and killed in Pietermaritzburg, 2 in Katlehong, 2 in Nanda and 2 in Duncan Village in East London.

As if that was not enough, midweek a gang went about shooting and killing everyone they came accross in the streets of Alex before they robbed them of their cellphones and shoes. 7 people died in that senseless killing. Joshua Mbatha of Alex FM is one of the victims.

There are many theories about these tavern killings. One such theory is that the killings might be an act of “terrorist” reprisal after South Africa’s involvement in countries like Mozambique to help fight the so-called Jihadists who have suspected links with ISIL. It is difficult to be dismissive of theories like these when non-South Africans branded AK47s in Gqeberha in broad day light and set alight taxis in a fight against taxi operators. There were no consequences against those who brandished weapons of war, let alone the arson committed. Intelligence and law enforcement agencies seem to be conspicuous their absence.

As a Black Consciousness adherent, I cannot help noticing that these anti-black killings exclusively take place in the black communities. That is not to wish they should have also happened in the generally affluent white communities. Apart from the abject poverty and squalor of the black communities, there is one more causative factor I propose to examine in reflecting on the tavern killings. That is self-hatred by black people. This came about because of dehumanising landlessness, colonialism and racism over hundreds of years.

Racism has so desensitised the Mdlalose Tavern killers of black pain that they could randomly shoot and kill people for no apparent reason other than that they look like themselves. There was no possible quarrel between the killers and the victims. That is how violent we can be against fellow black people.

When we embark on a labour strike, you should expect that a few black workers who happen not to join the strike end up killed and their homes set alight. This is despite the fact that the majority of white workers would be working as if there was no strike at all.

During the struggle against the white settler regime, political activists would necklaced and their homes set alight for the reason that they happened to belong to a different political organisation. Yet racism had so damaged those political activists that they never even imagined putting a burning tyre around the neck of one Eugen de Kock who tortured and killed tens of our struggle leaders on the notorious Vlaakplaas farm and elsewhere.

Self-hatred has dumped us in a corner where we cannot tolerate competition by fellow black people. If there is a black person who does well in the same business space as us, we hire thugs to go and kill him or her and burn down their property. Yet white people are welcome to do business in the townships through their gigantic malls that destroy our spaza shops.

Black people are so violent against one another that it is never enough that you are raped and your car is hijacked; you are killed as well. Back at home in Kwazakhele in Gqeberha, I have refused to buy my family the plasma TV because the young boys raid the households and rob them at gunpoint. They do all this during the day without hiding their identities. They have no fear for the law. If you report the robbery as Dr George Koboko did when his surgery was robbed, they return and shoot you dead in the supposed safety of your private space.

Black people are scared to open businesses in the townships due to lack of safety. That means poor people are depriving of the much-needed services because such businesses have to relocate to the distant towns. Ambulances have to be escorted to the townships because the paramedical personnel are robbed of their personal belongings. Just this past weekend four fidelity guards were ambushed in a Gqeberha township. Two of them died. They were black and poor, and they were killed by fellow poor black people. It turned out the killers only needed the guns carried by the guards.

You find this violence in electoral politics at the local government level. Killers are hire to kill councilors in order to create the space others who want that position. The tragedy of this is that comrades who kill one another are usually from the same political party. In some kind of a cobra effect, thugs ransack business in the townships and demand “a protection fee” from the very same thugs. The same thugs are hired by politicians to eliminate competition in the municipalities in return for tenders for the thugs.

Not so long ago, some black people in Diepsloot raided fellow black who are believed to be migrants from our neighbouring Afrikan countries and demanded that they produce “passes”. Zimbabwean Elvis Nyathi was beaten up and set alight when he could not produce his “pass”. Yet the Sharpeville Massacre happened because we were fighting against pass laws. Rather than encouraging that migrants should not be documented, one is highlighting the political irony of the situation.

There is no doubt that townships are apartheid products. Moreover, they were designed such that there were more taverns than libraries because we encouraged to drink rather than to read. No wonder Steve Biko once observed: “Township life alone makes it a miracle for anyone to live up to adulthood”. Yet democracy has normalised abnormalities by downgrading housing for black people from township settlement to RDP and shack settlement, which do not enhance the humanity and dignity of black people. For as long as South Africa retains the apartheid spatial development and “for Blacks only” poverty and unemployment, phenomena like the Mdlalose Tavern and Phoenix killings will remain the order of the day in this democracy.

Blackness should be made visible and respectable by addressing human development backlog of black people. Of cardinal importance is the investment in the education of black children. With the externalities that go with education, there is no reason why education is not free up to the first tertiary qualification. That intervention should, in the long run, help in the radical combating of poverty and crime. Of course, that should go with good governance and efficient running of the economy.