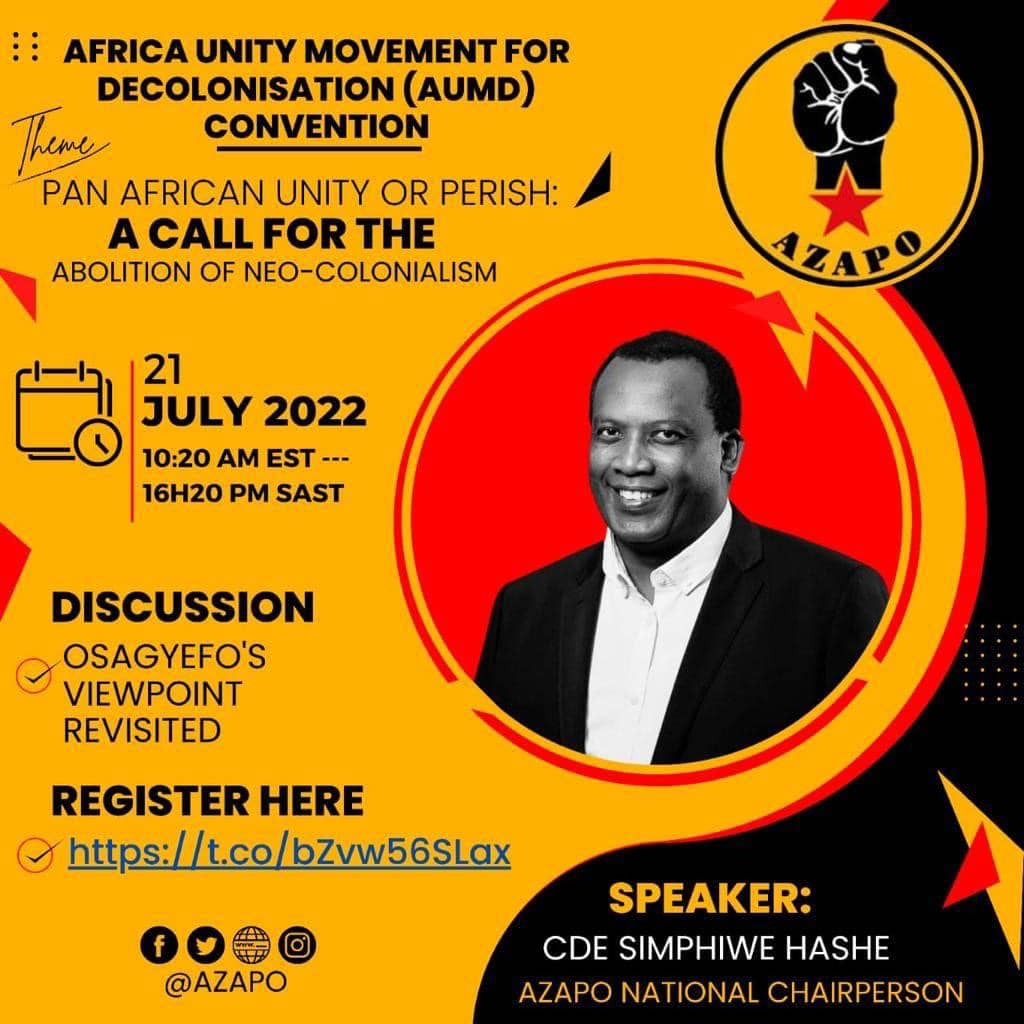 Theme: Pan-African Unity or Perish: A Call for the Abolition of Neocolonialism

Greetings from the Azanian People’s Organisation (AZAPO) to my fellow panelists and revolutionary activists across Afrika and the globe. There is no overstating the correctness of our desire as oppressed peoples of Afrika to dismantle neocolonialism now. It is the one phenomenon that continues to derail Black people’s path towards true liberation, land reconquest, self-determination, and socialism.

Since the arrival of European settlers on our shores, our people have been engaged in protracted warfare that gave rise to a permanent revolution that informed the relationship between the settlers who occupied Azania and Black people. This relationship characterised itself as that between the oppressor and the oppressed, the usurper and the dispossessed, the colonial system and the revolution. This permanence is occasioned by the unending response by our people to the existential conditions brought about by the dispossession of our people’s lands and their associated resources, the stripping of our dignity and the subjugation of our people that force us to live in abject poverty, gross inequality and hunger as a result of centuries of colonialism and racism.

The commitment to our struggle must therefore be unwavering for so long as the invaders of our lands remain in control, through proxies of our brothers and sisters who are ruling over us on their behalf.

We have been specifically asked to talk about AZAPO as a liberation movement, its approach to coalitions and the decision that gave rise to the cooperation agreement AZAPO sealed with the Pan Africanist Congress of Azania (PAC). One must state from the onset that the cooperation with the PAC has been protracted, dating back to the early years of the existence of these two components of the liberation movement. It was thus a no brainer for these two organisations to agree to cooperate for the sake of the suffering people of Azania and the commitment to dismantle neocolonialism and racism that was further entrenched through the 1994 transition.

The Africa Unity Movement for Decolonisation has to be commended for the foresight in seeing the need to bring together revolutionaries in Afrika and the diaspora to talk about the mechanisms of dismantling the levers of the white power structure and enable the abolition of neocolonialism in our beautiful continent.

The struggles against colonialism in Azania began as soon as the European invaders conquered our lands. These were characterised by wars of resistance against this foreign invasion. Our people were resolute that our lands will not be usurped on a silver platter. We learnt a great deal from the resistance of our forefathers and vowed to continue with these revolutionary efforts. Political organisations were then established to advance the struggle of our people. With the banning of the Pan Africanist Congress of Azania (PAC) and African National Congress (ANC) by the settler colonial regime in April 1960, there was a lull in occupied Azania which was occasioned by the brutal attacks on our people after the anti-pass protests. This then led to the establishment of the Black Consciousness Movement (BCM) in 1968.

Our organisation emerged in the late 1968 when our founding father Bantu Steve Biko led a group of Black students from a National Union of South African Students’ meeting at Rhodes University when Black students were prohibited accommodation and eating facilities on the basis of the colour of their skins. NUSAS was a multi-racial, liberal organisation that purported to be against the system of apartheid.

Biko and his group were confronted with the reality that NUSAS, which was led mainly by white students, could never be a vehicle that would lead to the liberation of Black people from colonial and racist oppression. As their consciousness increased, they realised that NUSAS, which had a majority of white students, would play the role of essentially blunting the anger of Black students towards the system as, on paper, the Black students would believe that there were white people who were against apartheid and that not all white people are bad and supporters of the system. However, NUSAS was unlikely to do anything fundamental to change a system that accorded all whites, regardless of the political leanings, first class status in Azania.

The walk-out from the NUSAS meeting led to the formation of the South African Student Organisation (SASO) in 1968, which adopted Black Consciousness as its guiding political ideology.  SASO’s emergence led to the formation of the Black People’s Convention (BPC) in 1972 as the students were of the view that Black people should have a mass based political organisation that would advance the agenda of liberation in occupied Azania.

Today we live under a very confusing system of neo-colonialism. When the white ruling class realised that the effort by our people was too much to bear and apartheid was becoming too expensive to maintain, they opted to negotiate the end of the system of apartheid. To understand this, we should look at what apartheid was. Apartheid was essentially a scaffolding that enabled the construction of the white economic and social power structure. When the white power structure was built and completed, there was no more need for the scaffolding. It had to be dismantled. This is what 1994 April election was. The essence of the removal of the scaffolding of apartheid meant the retaining of the white power structure.

So, what 1994 produced was a bourgeois democracy in the form of a Constitutional democracy. This meant that power would rest in the Constitution and not in the people through their Parliament which would have been dominated by representatives of the majority of the people.

The dawn of democracy in occupied Azania produced a government ruled by Black people. However, the South African State remained white dominated. All State organs remained white dominated. The South African Defence Force (SADF) remained. The liberation armies – the Azanian People’s Liberation Army (APLA) and Umkhonto we Sizwe – were integrated into the SADF which then became the SANDF. Our army, the Azanian National Liberation Army (AZANLA) was not integrated into the SADF because AZAPO had pleaded with our people not to embrace the 1994 sell-out settlement which was fostered to legitimise the grand theft of our land by the white tribe.

AZAPO decided to participate in electoral politics in 1999. The decision was taken in view of the fact that AZAPO did not want to fight a Black-led government through arms.

Bourgeois democracies sustain neocolonialism by giving access to resources to the amenable ruling parties that will act as their proxy.  The ANC was no exception when it was given access to resources that continued to sustain it for as long as it continued with the neocolonialist program of the white power structure. This is a general phenomenon with neocolonialism. This is why some liberation movements that win the first election after independence tend to stay in power for an extended period of time. It is the same situation in Zimbabwe, Namibia, Angola, Mozambique and many other countries.

In our country, you have a situation where the State remains the instrument to preserve white power. The Constitution has become a useful weapon to stop radical transformation of the economy. Land, which was the issue that gave rise to the conflict between Black people and the European settlers, remain in white hands. The economy, built on the back of Black people’s exploitation, remains in white hands. The Black government, in enforcing the Constitution, plays the role of a matshingilane (security guard) of white wealth and white privileges.

In playing this role, the Black government has presided over the entrenchment of poverty. The occupied Azania has become the most unequal society in the world. It is Black people in a democratic South Africa that remain trapped in informal settlements without jobs, without water, without electricity and without sanitation.

The white power structure controls everything. It controls tools of indoctrination such as the education and the media. Increasingly, the dominant narrative is that things were much better under apartheid. Ordinary people look at the falling standards of education, the collapsing healthcare and the failure of ESKOM to provide regular electricity. Ordinary people say things were better under apartheid. Of course, what they fail to realise is that under apartheid, ESKOM was designed to provide power only to a section of the population, which was mainly white. Johannesburg Hospital would have had no winding queue during apartheid because it was a white hospital that served only 15% of the population. Now it has to serve the entire population.

But the biggest problem is the fact that the Black ruling elite has been adopted into the white power structure and they are doing their best to ensure that it remains intact.

For instance, the government spends billions to ensure that the Gautrain runs smoothly. It costs the State billions of rands but it only serves a tiny minority of the people, mainly white and the top class of the Black middle class. The taxi industry that serves Black people is in a mess. The public railway system that serves Black people has essentially collapsed. In the townships, white owned businesses have invaded and pushed the African merchants out of business. Indeed, the white power structure remains intact.

Then there is corruption. The centre is simply not holding. Things are falling apart.

It is important to understand that the struggle of Afrikan people is connected. The struggle against colonialism remains. Colonialism has evolved to adjust with the times and metamorphosed into neocolonialism. Today the struggle is against imperialism. Those who stand against imperialism become targets. Afrikan strong leaders such as Colonel Gaddafi are removed from power and even killed. Countries trying to assert themselves are destabilised.

What should not escape us is that our dignity as Afrikan people will only be regained if we have economic power. When we are in Europe or in Asia or in America, it is only us who are sweeping the streets, cleaning their toilets, removing garbage; the image of our collective weakness will remain. That is why the attainment of real liberation in Azania is paramount. That liberation must dismantle the colonial architecture of our country’s economy and its supporting political systems.

We need to work together on this. Azania will not become better through the generosity of the white power structure but through the concerted struggle effort of our people against all forces that seek to maintain the status quo. The enemy has converted some among us to be their agents. There is no revolution without casualties.

“The total liberation and unification of Africa under an All-African Socialist Government must be the primary objective of all Black revolutionaries throughout the world. It is an objective which, when achieved, will bring about the fulfillment of the aspirations of Africans and people of African descent everywhere. It will at the same time advance the triumph of the international socialist revolution, and the onward progress towards world communism, under which, every society is ordered on the principle of –from each according to his ability, to each according to his needs.” — Osagyefo Kwame Nkrumah

Forward with the revolution!