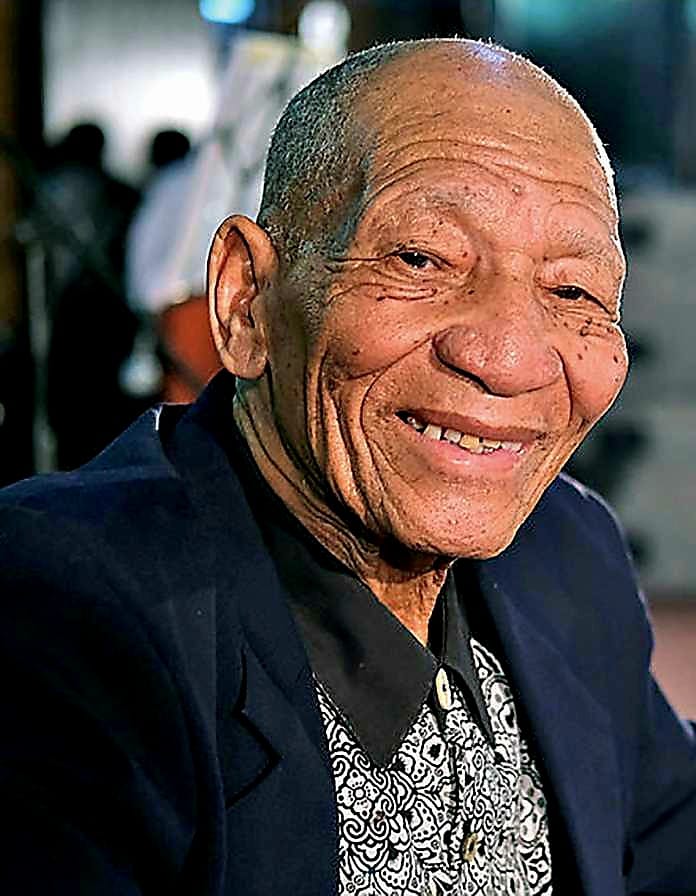 A TRIBUTE TO DR DON MATTERA

It was the 18th day of July – the birthday of the iconic Nelson Mandela. As usual, the government had called on every South African to offer a 67 minutes service to the people. One great and legendary Azanian was conspicuous by his absence because he was preparing for his journey to his eternal resting place. Dr Don Monnapula Mattera (87) had decided to give rebellious meaning to “67” by twisting the figures to “76” and raised his Black Power Salute as he embarked on his spiritual journey to intensify the liberation struggle at another level.

As Mandela arrives, Mattera leaves. This life and death irony was repeated when Mandela chose to depart on 5 December – the arrival date of Mangaliso Sobukwe. In that sense, Mattera meant no disrespect to Mandela, but took the cue from him.

In his own blood flowing from the pen, Bra Zinga, as we affectionately called him, had forewarned us of his:

and I want to leave this city

seething in unrest and injustice

I have already left

on the banks of the Nile

or under some spreading tree

I shall be sleeping

the sleep of freedom

leave me to dream

my dream of departure

from a city seething in unrest,

I grow weary of eating brine

and I hunger for desert fruit

I was coming out of an AZAPO meeting around 19h00 in the evening when I was told Bra Zinga had fallen a few hours earlier on that day. As a devout Muslim, Bra Zinga was to be buried in the evening of his falling. There was no way I could miss Bra Zinga’s send-off. Not even my own funeral could keep me away from that send-off. I dashed to the funeral. As we arrived at the funeral with General Pitso Hlasa, the procession was snaking out of Protea Glen to the Heroes Acre of the West Park Cemetery.

How weird and unreal it was to see Bra Zinga in a (Muslim) coffin that night. Bra Zinga was so immortal that I could not associate him with death. Earlier in the day, the heavens had given us a friendly and smiling winter sun. As the sun was setting, it twisted its bright face and sulked as it quickly dashed to the horizons as if to deliver some tragic news from this earth with thorny pebbles for the wretched. Suddenly, it was unbearably chilly as night fell. As a painful reminder of the absence of life in South Africa, the burial site was lit with some makeshift methods. Bleeding hearts and anxious faces were chanting some verses in Arabic. Almost everyone jumped to be the pallbearer to carry Bra Zinga shoulder-high into his final resting place. Two men were waiting for Bra Zinga in his grave to deliver him back into the womb of Mother Earth from where he came.

Because he prepared for this journey, Bra Zinga graphically described this poignant moment in his lifetime:

The Sun has died

The sun closed its eye

it began to die

as tears of leaf fell

from the cheeks of their boughs

Above birds in solemn flight

formed a guard of honour

for the dying monarch

and the flag of night was lowered

as the world covered itself

in black cloak of mourning

A star showed the resting place

and crickets chirped in sad repine:

But the sun will rise again

the dreams of children

and the hopes of men

I have known Bra Zinga for about 40 years within the context of AZAPO and the Black Consciousness Movement. I first met him – no, I first saw him – at the National Forum conference in 1983 where the Azanian Manifesto was drafted. It must have been one of his first open meetings he attended since his banning alongside Bantu Biko and other BCM leaders from 1973 to 1982. I was so dumbstruck that I didn’t know what to do. My words were so frail, and my voice so inaudible to make a feeble attempt to speak to such a godly figure like Bra Zinga. I was content just with “touching the edge of his cloak”. I met him again in 1984 at an AZAPO Congress in Patidar Hall in Lenasia. In the 1990s and 2000s I grew sufficient courage to speak to him directly only to discover how easy and welcoming he was to non-entities like me. That is how we could directly invite him to address the 1996 AZASCO Congress at my alma mater University of the Western Cape, and at the late AZAPO leader Muntu kaMyeza memorial remembrance in 2012.

Because “Memory is the Weapon”, the forgetful world has to be reminded that Br Zinga is one of the founders of the Black Consciousness Movement. It is during his political activism in the BCM that he helped found the Union of Black Journalists (UBJ), for which he later became the Vice President. Many of his spiritually uplifting and consciousness-raising poems were scribbled during the era of the BCM. No wonder that the white settler regime banned him in 1973. With the lifting of his banning, he became active in AZAPO. Yet he had not abandoned his association with the PAC. At every meeting, he never failed to teach us that “Black Consciousness is the journey; Pan Afrikanism is the destination”. He was saying this while he was cajoling AZAPO and the PAC to “unite before I die”. We are proud to declare to the world that the PAC and AZAPO complied with Bra Zinga’s command before his departure. Bra Zinga’s organisations are united in action by a Declaration of Cooperation signed in the beginning of the year.

Indeed, and as he would say, “hy was ‘n manocha tussen die moegoes”. He would remind those who were inclined to forget how rough he could be that, “ne ke shapa ntja e nnyele” (I used to beat somebody until he messed up his pants). In his younger days, he got heavily involved in gangsterism in our townships of Westbury and Sophiatown. In no time, he regained his consciousness and swapped his sword for the pen through which he put his feelings and visions to paper. Because he loved his sword, he never threw it into the sea. He simply pointed it away from his brother and directed it to the enemy of the people within the political dictates of the slogans “Asimkhawadi uDarkie – Siyamphilela”, and “War against the enemy; peace among Afrikans”. Those who terrorise the people by unleashing anti-black violence in the form of tavern killings can take a leaf from Bra Zinga’s book.

Blackness demonstrates amazing resilience. It is the irony and honesty of life that when black mixes with white the product remains black. However, we also witness a product that is rebellious where black mixes with white. We see this rebellious black product from Malcolm X to Frantz Fanon; and from Frantz Fanon to Don Mattera. We are told that Bra Zinga’s grandmother from the Eastern Cape was isiXhosa-speaking and black. She fell in love with an Italian white man in defiance against the so-called “Immorality Act” of the apartheid regime. Here we see a black woman saying nobody is going to cage me as lovebird because “I love what I like”. Out of this union, the black world was gifted Bra Zinga’s father who met a SeTswana-speaking black woman who would deliver Bra Zinga to this anti-black world.

There must be a reason why this loving family gave Bra Zinga the name “Monnapula”, which means one who is the rain. This is more than bringing the rain; he is the rain. Where you see water, you see him. Where you see the river, you see him. We have seen this river rolling and dancing down the mountain and through the hills and valleys. We have seen it caressing the rocks and sometimes bruised in the process. We have seen it give life to a desperate garden of survival. We have seen this river kissing a dirty human body and quenching the thirst of an animal before it is welcomed by the ocean to be:

In his strong days, we saw Bra Zinga grabbing his axe and dragging it into the forest to chop the woods. We saw him making the fire. Nevertheless, he never enjoyed the warmth of his fire. There was only one season in his whole life. That season was winter. We saw him fetching the water that he is. Yet he died thirsty. Of course, we saw him cooking the food. However, he died starving. He mixed the herbs of the earth and healed others, but no one came to the fore to administer the medicine to him. Yes, he built all of us a home. Yet he died homeless.

It is Bantu Biko who cautioned us that “a nation that forgets its martyrs will itself soon be forgotten”. Bra Zinga is not bitter. He is bigger than that. He did not expect any love or praises for his contributions and sacrifices for the liberation and the restoration of the humanity and dignity of black people. As he himself said, all he is asking for is:

Remember to call at my grave

That I may rise

And when my eyes have filled their sight

Do not run away for fright

If I crumble to dust again

It will only be the bliss

Of a long awaited dream

That bids me rest

[Qekema is the President of AZAPO]