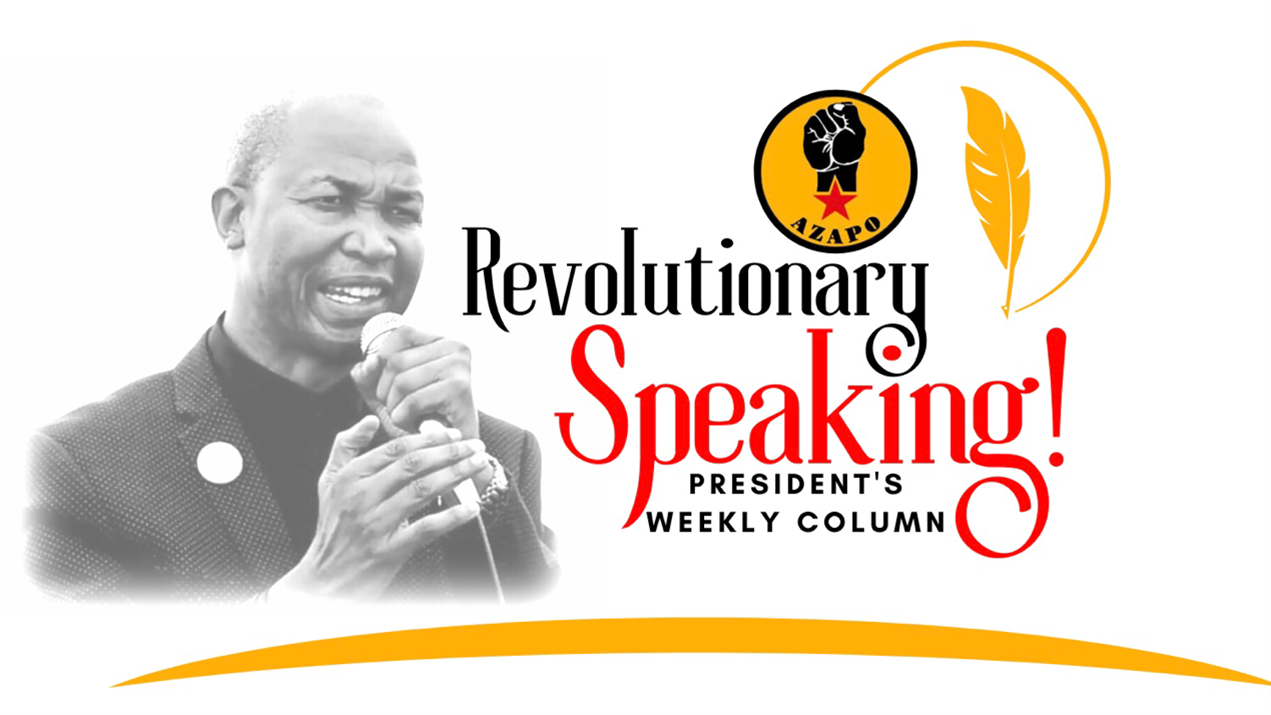 THE HIGHJACKING OF AZANIAN POLITICS

The liberation movement took off where the Afrikan indigenous monarchy left off with regards to the politics of land repossession and anti-colonialism.  Though there was no unanimity in terms of the approach to the struggle for liberation, it was right to expect that the liberation movement would be the one to monitor and evaluate the post-1994 democracy project and its politics laced with the elusive promise of “a better life for all”.

Sadly, evidence is in abundance that the democracy project has been derailed and hijacked by corrupt elements in the South African society.  Politics no longer serve the purpose to ensure that the wealth is redistributed to fast-forward black people out of the development backlog and realise an egalitarian society Steve Biko once talked about.

There was a time when it was politically convenient that the ANC should gain, as it did, an overwhelming support at the dawn of democracy.  Other political parties of different political persuasions may have resented that eventuality, but it was arguably useful that a section of the liberation movement should achieve that massive and decisive political advantage to set the economic reconstruction of the country in motion within the power context where the colonialists and racists would have no chance to undermine and reverse.  In the march of time, that massive political power advantage proved counterproductive, as the ANC seemed to present itself as an instrument through which the South African politics could be hijacked by capitalists and racists.

To make sense of this hijacking, listen to Cde Thabo Mbeki revealing in 2018 that the ANC as a ruling party had itself been hijacked:

“There are many people and corrupt elements that have embedded in the ANC from the `branches up to the National Executive.  If you want to renew the ANC, you have got to make sure it is cleansed from that element that has managed to come in”.

To demonstrate the gravity of the situation, Cde Mbeki reiterated this position when he visited the ANC in the Free State in February this year.  While he called for the “political audit” of the ruling party’s membership, his Free State Comrade Mxolisi Dukwana escalated the call to the membership overhaul and their rejoining the ruling party in order to root out the “element” that hijacked their organisation.

The “element” has so invaded the ruling party that some people see the Local Government Elections as an entry point to access and influence the direction of tenders in the local development sphere.  This explains why councilors are often assassinated to force a by-election for an earmarked individual.  In 2013, it was reported that there had been more than 450 political assassinations of this type since the democratic dispensation from 1994 in KwaZulu-Natal alone.  Moreover, there were more than 20 assassinations leading up to the 2016 Local Government Elections in South Africa.  From this we learn that not only sitting councilors are assassinated, but also competitors during an election.

In the Nelson Mandela Bay Metro, a R21 million tender to clean storm water drains was awarded to the so-called SMMEs in 2018.  It turned out that some of these “local businesspeople” were thugs that had hijacked the politics of the Metro.  The decisions of the Metro were first concluded outside by the thugs and passed by proxy politicians in the council meetings.  This so-called “Great Drain Heist” saw “businesspeople” hunting one another out and followed by more than 20 assassinations. More than 20 assassinations followed since the awarding of the tender in 2018 and up to 2019.

It is about time citizens reclaimed their power and redirected politics to serve the development interests of the people.  Messianic politics is a counterrevolutionary phenomenon.  Politics is not the craft of experts, but the undertaking of the people as they shape their own destiny.  This is the mass line.  Indeed, politics is too serious an undertaking to be entrusted to politicians.