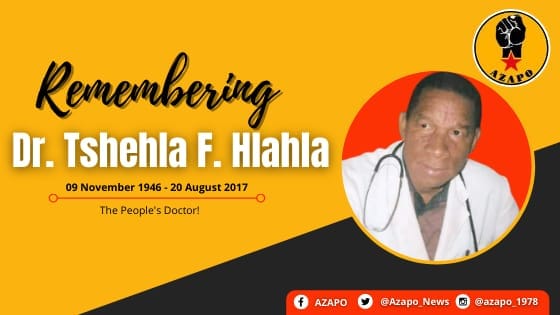 It was late on Sunday afternoon on August 20 when Dr Tshehla Francis Hlahla left his surgery at Ga-Hlahla village to drive to Mahwelereng in Mokopane (Potgietersrus), where his main practice was situated.

He was a few kilometres into his journey when he was alerted that a patient had just arrived at the surgery requiring his attention.

He turned back, attended to the patient, and resumed his journey, with the car carrying the invalid not too far behind.

He was involved in a head-on collision with a van, in view of the occupants of the vehicle carrying the person he had just treated.

It was this car that rushed back to his relatives at the surgery to tell them of the horrific accident.

His relatives arrived at the accident scene to discover that he was dead.

On late Sunday afternoons, most of us laze around. Not Hlahla; he was busy seeing patients. That’s the way he was.

While studying medicine, Hlahla was a contemporary of Steve Biko’s at the University of Natal, in Durban.

He imbibed and thoroughly internalised the tenets of Black Consciousness, living by its teachings all his life.

He deeply loved his people and believed in their dignity and the inherent humanity of all people. This he displayed not only in his political work, but also in his medical practice and general interactions with ordinary people.

It was something to behold, watching him join his people in traditional song and dance in his village in Moletjie.

Hlahla opened his surgery in Mahwelereng in 1974 and stayed in that community as a family doctor for 43 years. He treated everyone, whether they had money to pay him, or not.

In emergencies, they could wake him up in the dead of night and he would be there for them.

He served these two communities with dedication, love and compassion.

For these 43 years, he has been oscillating between Mahwelereng and Moletjie like a well-oiled pendulum. He also dedicated one day a week to work at the local Mokopane public hospital.

No wonder he was known as the people’s doctor.

For his assistance and medical care of the poor and the destitute, City Press honoured him in 2002.

Having joined the Black Consciousness Movement through the South African Students’ Organisation (Saso), during his student days at the University of Natal, he never wavered. In Azapo (Azanian People’s Organisation), he was known to be as reliable, committed and predictable as the sun.

He was one of the stalwarts who helped with the establishment of Azapo in Mahwelereng and other parts of Limpopo. Right up to his death, Azapo meetings were held in his surgery complex.

The highest formal position he ever held in Azapo was as chairperson in the then Northern Transvaal.

Hlahla excelled most in getting things done. In addition to giving the organisation a lot of money, he had the uncanny gift of getting people to coalesce around him and get stuff done.

He would fill his cars with petrol and send people around to do organisational work. Working with people like Joe Matjiu, Tsoaledi Thobejane and Richard Ramodipa, the Mokerong Advice Office was established in 1982 to help ordinary people with their oppression-related problems.

He played no small part in the recruitment of cadres for the Azanian National Liberation Army, Azanla, helping to take them out of the country for training and financing their activities when they came back.

During the state of emergency in 1986, he was detained for six months and kept in Nylstroom (now Modimolle) where he was interrogated on his political activities.

The grounds of his surgery were dug up by soldiers hoping to unearth weapons of war.

He visited the Black Consciousness Movement of Azania, offices in Harare, Zimbabwe, several times to brief us and co-ordinate efforts in the struggle.

Imagine what the situation could be if our health workers in clinics and hospitals and those in administration were just half as dedicated to their work and patients as Hlahla was?

We would all be enormously proud of our health care system and its workers.

Hlahla leaves us a legacy of patriotism, hard work, compassion, service and humility.